Search In the hills

This article was first published in the Tararua Tramper Volume 90, # 11, December 2018

December in the hills with Chris Horne and Michele Dickson 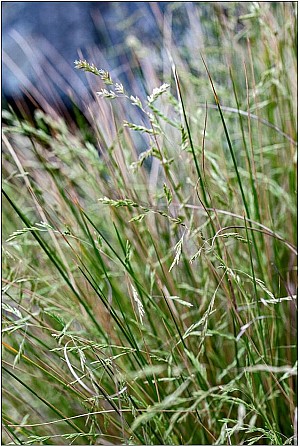 Origin of the names

Poa comes from the Greek word for meadow-grass or fodder; cita comes from the Latin word meaning to excite, arouse. In silver tussock it refers to the rapid growth of this species of grass, and its ability to colonise recently denuded ground. The suffix ‘agg.’, meaning aggregate, indicates that the species has various forms, depending on where you see it. Note: the Te Reo name, wī, is also applied to some species of Juncus/rushes. Silver tussock gets its name because the leaves are often shining. The word “tussock” is applied to those tufted grasses which hold water among dead leaves at the base.

Poa cita is endemic to Aotearoa/NZ. It grows throughout Te Ika a Māui/North Island, but is rare from Raglan to Manawatu, except on Mt. Taranaki. On Te Waipounamu/South Island it is widespread, and also on Rakiura/Stewart Island, Rekohu/Chatham Island and Rangitāhua/Kermadec Islands. Habitat Look for the widespread silver tussock on relatively fertile soils in lowland to subalpine areas, in grassland, pasture, open scrub and forest, and on coastal cliffs.

Poa cita is member of the Poaceae family, the grasses. It forms a rather dense, shining tussock, 30 cm - 100 cm, sometimes hanging two metres down steep banks. The smooth leaves are light brownish-green, sometimes with a blue tinge. The leaf-blades are 20 - 60 cm long x 1.0 - 2.5 mm wide, folded or flat, and leathery. Dead leaves persist attached to the plant.

As with most grasses, the flowers/florets contain male and female parts, each enclosed within chaffy, scale-like bracts. Collectively the florets are grouped into spikelets/inflorescences, all making up the feathery flowering head. The male parts hang well out to catch the wind for pollination. The female part develops into a tiny grain containing the seed, fused within it. Flowering occurs from early summer, with grains ripening over the next few weeks depending on conditions. The whole culm/flowering stem of silver tussock may be 10 cm - 70 cm. It has slender branches.

Māori treated burns with ashes of burnt wī, and used a decoction of wī as an internal rongoā/medication for arthritis and rheumatism. They used wī for thatching and as a floor covering. Early Pākehā settlers cut silver tussocks off at the base, then stuffed them into sacks to make mattresses. To build cob cottages, they cut the grass into short lengths, put them into a shallow pit filled with wet clay which they, or horses, trampled on to mix the two components. They formed the clay/tussock mixture into bricks and left them to dry. These were used to build often large homesteads with several rooms, all warm and dry, and durable for decades.

Look for it along Hawkins Hill Road, where it thrives on wind-swept road edges, on Wellington’s south and west coasts, and on the Remutaka, Aorangi and Tararua ranges.